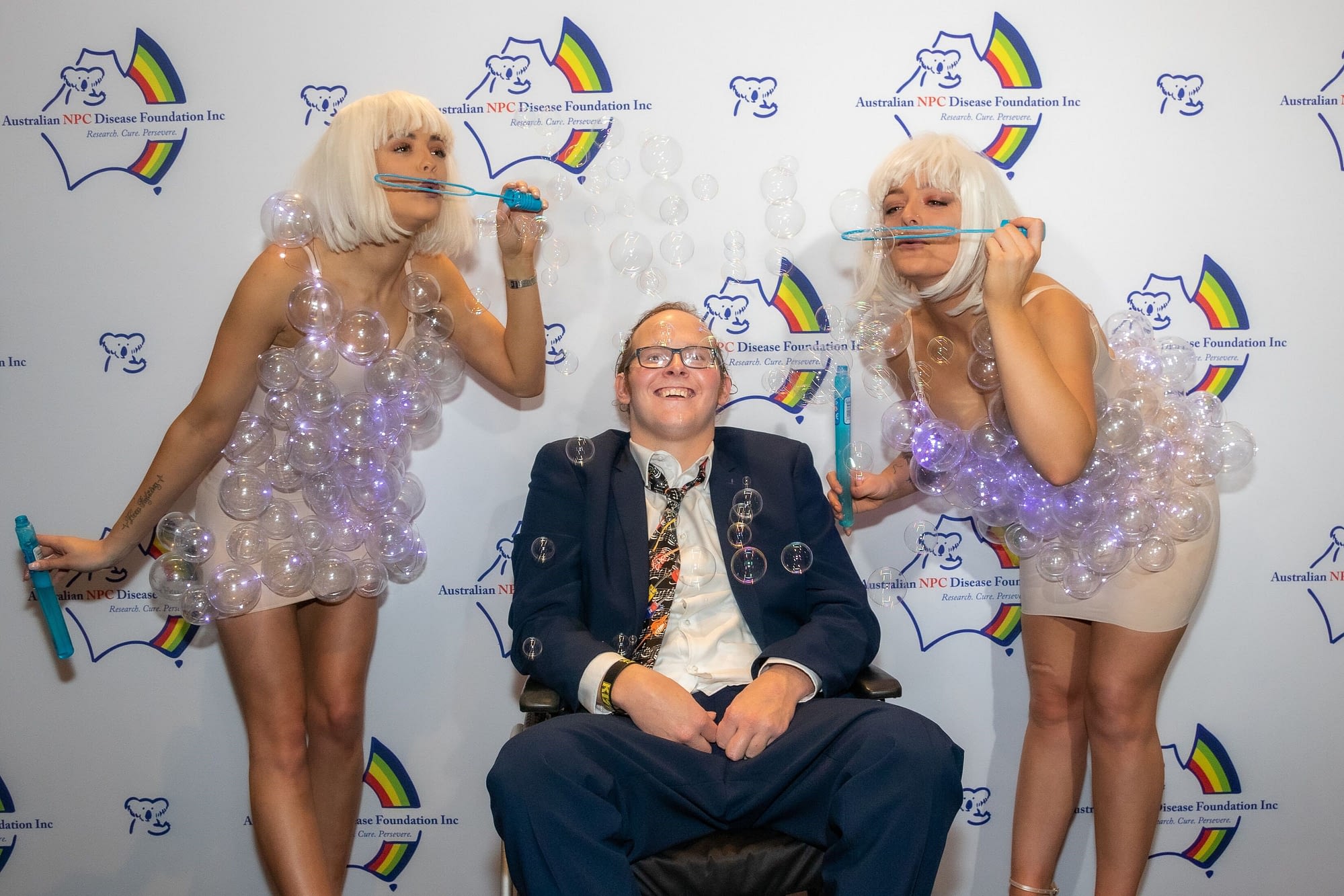 Alive Events Agency was privileged to be invited to Produce the Australian Niemann-Pick Type C Disease (NPC) Foundation’s inaugural conference and Gala Fundraising Dinner which raised $214,540 for research into this rare genetic condition.

This devastating terminal disease gradually leads to loss of muscle control, and requires research and clinical trials to find a cure.

As the research to support the NPCD community relies entirely on donations from their community, the Fundraising Dinner demanded some creative thinking from Alive to maximise the opportunity to raise funds at the inaugural gala dinner on Saturday 20 July 2019.

Two roving Bubble Girl performers dressed in custom made costumes provided a thrilling meet and greet in the event’s foyer as guests arrived at the Pullman on the Park in East Melbourne. The Bubble girls were illuminated with LED lights and had handheld bubble machines, providing playful and dynamic entertainment to set a vibrant mood for the Gala Dinner.

Playing into that sense of fun, a Balloon Raffle formed the key component of the fundraising night, with more than 470 guests encouraged to purchase balloon entries in the foyer. Notifications were sent via SMS with details of the prize results.

Alive encouraged repeat entries with responses for non-winning balloons detailed as “Sorry, but no win this time…would you like to support NPCD and play again? Head to the counter for more balloons!”

President of ANPCDF Mandy Whitechurch said from a net total raised of $73,164.09, more than $50,000 was received during the gala dinner itself between live auctions and the sweepstake competitions, with many people going home with an awkward number of prizes under their belts.

The success of the Gala Dinner in particular was critical to the cause, with the foundation needing $10,000 a month for research at The Florey Institute of Neuroscience and Mental Health in Melbourne.

Without any government assistance, the fundraising achieved through the Gala Dinner provided much needed financial backing in the search for a cure for this debilitating genetic disorder which can prove fatal within the first few months after birth.

Further to the success of the charity event, Alive also manged the NPCD’s annual conference. This was the first time the not-for-profit had held a large conference in the Melbourne CBD, which is why they entrusted the details to an event management company who were able to arrange accommodation, speakers, ticketing, catering and entertainment in seamless fashion.

The welcome function on Friday 19 July was held at the RACV City Club, allowing families who are affected by the disease a chance to meet and catch up prior to the next day’s conference and gala dinner.

With some of the attendees affected by NPC and in wheelchairs, it was imperative for Alive to meet the disability requirements of those guests with wheelchair accessible hotel rooms and travel services, appropriate venues for the event and dietary considerations – covering the practicalities and sensitivities of those affected by the illness.

The NPCD conference also offered insights into not just the disease, but clinical trials and drug development research with Alive sourcing speakers in the field to detail current progress with treatment and the search for a cure.

A conference that provides much needed knowledge, fundraising dollars and a good time for the community affected – that’s an occasion that ticks all the boxes for a charity event to remember.